adidas Group continued to struggle with its ailing Reebok business in the third quarter as the company continues to clear out entry price-point product from its inventories. That process is expected to be largely completed during the fourth quarter, which would set up the Reebok brand with the possibility of profitable operations in 2009.

However, market conditions will likely need to align favorably for Reebok to find the black. Management did note on a conference call with analysts that Reeboks emerging markets business does continue to grow at a healthy clip, noting that the brand has a 50% market share in India.

Outside of the Reebok business, things were much brighter for adidas Group.  Sales grew for both the adidas brand and for the TaylorMade-adidas Golf business for the third quarter, with adidas backlogs also showing healthy growth at quarter-end.
Though adidas for the most part reports only year-to-date results, not often detailing quarterly numbers, the third quarter results can be easily gleaned from a comparison between the nine-month YTD and first half reported figures. The results presented here focus largely on implied third quarter numbers and not figures actually reported by adidas.  All numbers in the accompanying charts, however, were supplied by adidas Group.
At Brand adidas, total sales in euro terms increased 10.2% to 2.22 billion ($3.34 bn) in the third quarter from 2.01 billion ($2.77 bn) in Q3 2007, but improved 15% when excluding the FX rate impact from the stronger euro against other currencies.
Owned-retail continued to outpace overall brand sales growth, increasing 15.0% in euro terms to 398 million ($600 mm) in Q3 from 346 million ($476 mm) in the year-ago period.  For the third quarter, owned-retail accounted for 18% of brand sales, compared to 17% of sales last year.  For the first nine months of the year, comparable store sales increased in the high-single-digits. However, comps had increased in the double-digits for the first half over the same period in 2007, suggesting that third quarter  comps were somewhat soft.

Brand adidas revenues would have still increased 9.3% without the benefit of the owned-retail growth.
The Sport Performance category continued the double-digit growth rate established in the first quarter.  For the first nine months of the year, all major product categories saw sales increase, with football (soccer) posting the largest growth. Sales in running, training and basketball grew at a double-digit rate for the nine-month period as well. Sport Performance sales for the first nine months of 2008 grew 19% on a currency-neutral basis.

On a regional basis, Brand adidas sales, when measured in euros, increased in the double-digits in all regions except North America, where they were down mid-singles.  Sales were up 10.3% in Europe to 1.18 billion ($1.78 bn) from 1.07 billion ($1.47 bn) in the year-ago period.  Management raised sales expectations for full year brand sales growth in Europe to the high-single-digits, up from previous guidance of mid- to high-single-digit growth.

In North America, Brand adidas sales declined 5.9% in euro terms to 319 million ($481 mm) from 339 million ($466 mm) in Q3 last year. Currency fluctuations hurt the brands North America result as sales grew 3.2% for the quarter when measured in U.S. dollars.  For the full year, Brand adidas revenues are expected to decline in North America as a “result of the tough market conditions and competitive retail environment.”

Asia/Pacific sales were up 16.8% for Q3 in euro terms to 508 million ($765 mm) from 435 million ($598 mm). On a conference call with analysts, management noted that the flagship store opened in Beijing prior to the Olympic Games is now averaging over 200,000 visitors a month.  Year-to-date adidas sales in China have increased more than 50%. After slowing to low-teens growth in Q2, Brand adidas sales to Latin America rebounded to growth of 28.4% for the third quarter. Regional sales totaled 190 million ($286 mm) for the quarter, up from 148 million ($203 mm) last year. 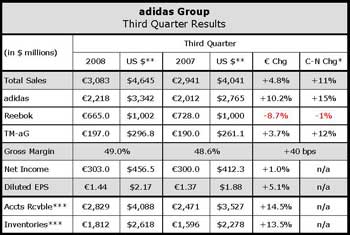 For the full year, Brand adidas sales for both the Latin America and Asia/Pacific regions are expected to grow at double-digit rates.

Management maintained overall brand sales growth expectations for the full year, projecting sales to grow in the low-double-digits on a currency-neutral basis.  Growth is expected to be driven by both the Sport Performance and Sport Style divisions, as well as by owned-retail expansion and backlog increases. Despite a tough comparison with last year's futures orders that were up 16%, adidas' backlogs grew 4% at the end of September. With the exception of Europe, where backlogs were flat, orders increased in all regions.

Reebok brand sales were 665 million ($1.00 bn) for the quarter, representing an 8.7% decrease in euro terms.  Reebok brand sales decreased 1% in Q3 on a currency-neutral basis, despite “continuous progress in emerging markets.”

Reebok segment gross margins declined 380 basis points for Q3 to 36.4%.
Management tempered its outlook for the Reebok brand this year, now expecting net sales to be “stable compared to last year.” The new outlook compares to earlier guidance of a mid- to high-singles sales increase for the year.

For Q3, currency-neutral net sales for the TaylorMade-adidas Golf business grew 12% to 197 million ($297 mm) from 190 million ($261 mm) last year. When measured in euros, sales grew 3.7% for the third quarter.  Management noted that the company had expanded its market share in metalwoods to over 30% in the U.S. and to over 20% in Europe. Sales growth in the U.S. and Asia/Pacific more than offset declines elsewhere. Management raised its sales guidance for the TM-aG business, now expecting high-single-digit  sales growth for the year, up from earlier guidance of mid-singles growth.