“Manufacturing in the U.S. really makes an impact. There are also immeasurable business benefits to keeping the majority of production in eye’s sight,” said ACR President Gerry Angeli. 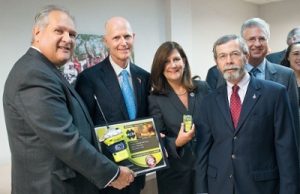 Over the past 60 years, ACR has had the honor of manufacturing lifesaving equipment for military forces, aviation and space programs, and for maritime and outdoor enthusiasts around the world, recreational marine being a core of their business and one of the most impactful locally.

“Manufacturing at ACR not only creates jobs in the U.S., which in turn supports the local economy, but it also has a multiplier effect of creating another three to five jobs through the supply chain leading up to the operation and production of products being built at ACR.”

The majority of ACR products are made to order; therefore, ACR relies on local suppliers to deliver them specific quantities of quality parts in a timely matter. ACR is also strategically located near many of the customers they serve. With easy local access to the airport and seaport while resting in the epicenter Fort Lauderdale, ACR is able to keep their finger on the pulse of customers’ changing needs as well as stay on top of industry trends. These are just some benefits to manufacturing in the U.S., the most important being building quality products that are used to save lives.

Next week, approximately 20 students from Broward County’s Atlantic Tech High School will visit ACR and participate in an interactive tour where ACR’s engineering department employees hope to inspire the makers of tomorrow to learn more about and consider a future in manufacturing.