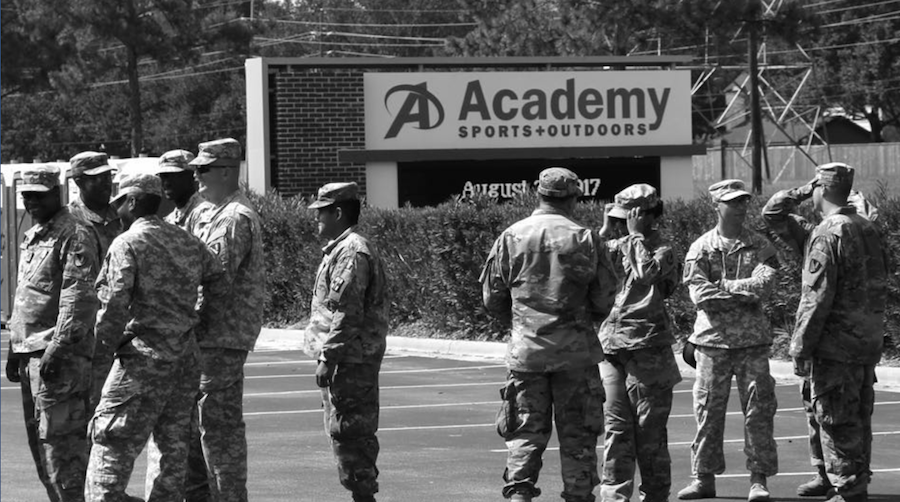 To support rescue and recovery efforts in the wake of Tropical Storm Harvey, Texas-based Academy Sports + Outdoors has converted a section of its 500,000 square-foot headquarters into a unified command center and shelter that has housed more than 1,100 first responders.

Located 35 miles outside of Houston, Academy’s corporate facility in Katy, Texas is hosting an operational base for teams from the Federal Bureau of Investigation, the National Guard, the United States Army, the Texas Department of Public Safety, EMS crews, the Houston Police Department and others.

Since the rescue efforts began on Monday, Academy has provided food, shelter, rescue boats, equipment and dry clothing to first responders as they continue to assist in relief efforts. In recent days, more than 400 first responders have been sheltering at Academy, and as they are transitioning out, 700 U.S. Army soldiers are now moving onsite. Academy is also host to the National Forestry Service as they ready for evacuations, along with a mobile surgical unit and 50 ambulances on standby.

“These individuals are making the ultimate sacrifice by risking their lives to save others,” said J.K. Symancyk, chief executive officer, Academy Sports + Outdoors. “The least we can do is provide supplies to keep them safe and give them a warm, dry place to rest, recharge and refuel.”

The greater Houston area is also home to approximately 5,500 of Academy’s 23,000 team members. Academy is assisting team members and their families affected by the storm by offering shelter at its headquarters as well as $1M in direct financial assistance for immediate relief to those who were affected by Hurricane Harvey. More than $500,000 has already been direct deposited to team members.

“We are devastated by the impact Harvey has had in our own backyard and on our team members,” added Symancyk. “We are, and will continue to be, committed to supporting our local community as well as all who have been affected throughout the Gulf Coast.”

Academy Sports + Outdoors is supporting various organizations with product donations that will include numerous supplier contributions in excess of $1 million. Donations include much needed supplies, such as footwear and clothing, as a way to help those displaced by the storm. Along with this donation, Academy is activating a customer donation program at all 238 store locations and online at redcross.org/academy, with proceeds to assist the American Red Cross in its relief efforts.

At the height of the storm, most of Academy’s 37 store locations in the greater Houston area and along the Texas coast were closed, along with the corporate office and local distribution center. The corporate office, distribution center, and all but one Academy store locations are open. Some stores are running limited hours to continue to aid first responders and local communities (store hours listed on academy.com).