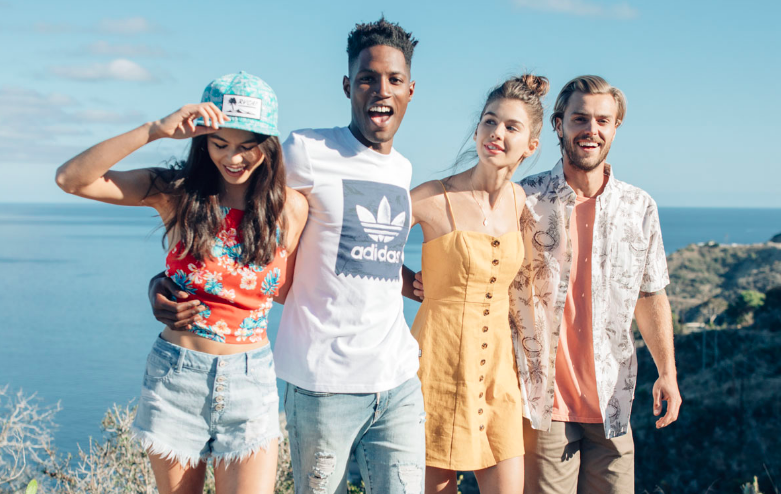 Shares of Tilly’s Inc. rose $1.55, or 12.7 percent, to 13.76 Thursday after the action-sports themed retailer reported first-quarter earnings that exceeded internal guidance on improving store traffic and indicated the technical issues that had been derailing e-commerce operations are abating.

E-commerce sales were down 7.2 percent for the quarter due to various technical issues associated with a new order management and website systems already discussed on the retailer’s fourth-quarter earnings call in March.

E-com sales incrementally improved each month as the issues have been addressed. Online sales were down 10.2 percent in February, 6.5 percent in March and 5.5 percent in April. Online sales are up low-single digits so far in May. Said Thomas, “We believe this improvement is particularly encouraging because we have not yet fully reactivated our omnichannel initiatives.”

The retailer’s direct-to-consumer program is currently active in only about 20 percent of its stores as the offering is being slowly reintroduced. Pick up in store is not yet active in any markets, but will start to be reintroduced during the second quarter. Said Thomas, “We expect the trend of e-com sales to continue to improve during the second quarter as we address remaining lower level issues in omnichannel execution.”

Among categories, positive comps in girls, footwear, men’s and boys were offset by low single-digit negative comps in women’s and accessories.

“Our girls business was particularly good except for dresses,” said Thomas. “The strength of our branded assortments drove positive results in footwear, men’s and boy’s.”

The women’s tops business improved for both branded and private label with the introduction of spring assortments, but that was offset by weakness in swim, dresses and intimates. Added Thomas, “In the early stages of the second quarter, all departments are comping positively with the exception of accessories, which remains down low-single digits.”

SG&A expenses were reduced 30 basis points to 27.2 percent of sales. The improvement was primarily driven by corporate payroll savings and disciplined store payroll management, despite minimum wage increases in certain markets. The $400,000 net increase in SG&A expenses was primarily due to costs associated with new order management, website and point-of-sale systems.

Inventory per square foot was down 2.3 percent at the end of the quarter to last year, marking Tilly’s 10th consecutive quarter with sales comps stronger than inventory comps.

The second-quarter will benefit from impact of last year’s 53rd week calendar shift with the first several days of August, which are in the back-to-school season, now falling into Q2 this year versus Q3 last year. Tilly’s estimates the calendar shift resulted in an increase of approximately $12.3 million in last year’s comparable sales base and approximately 10 cents per share of EPS for Q2 comparability.

The same calendar shift will have an opposite impact on Q3 with a net reduction of approximately $13.9 million in last year’s comparable sales base and approximately 12 cents per share of EPS out of Q3 for comparability purposes.

For the current second quarter, total sales are expected to range from $153 million to $157 million based on a 1 percent to 4 percent increase in comparable store sales. Q2 operating income is projected to range from $9.5 million to $11.0 million and EPS from 24 cents to 28 cents. That compares with adjusted earnings of 11 cents per share on sales of $136.4 million in the same period a year ago.

Addressing a few key initiatives, Thomas noted that Tilly’s is on track to open 15 stores this year, including three RSQ pop-ups, while five will be closed. Negotiations are in progress with roughly 120 lease decisions to be made over the course of this year and 2019. Said Thomas, “Our efforts have generated five consecutive quarters of occupancy cost improvement relative to sales, and we currently expect this trend to continue throughout fiscal 2018.”

On marketing, store events, contests and improved customer engagement continue to support traffic. One example given was a collaboration with the Warner Bros.’s movie, “Rampage” that included an in-store augmented reality experience enabling customers to take pictures with characters from the movie and potentially win VIP experiences related to the movie. Several other chain-wide events were also conducted that included “a variety of food, fun and giveaways.”

A branding firm has also been engaged to assist in enhancing Tilly’s brand awareness and engagement across the country and a number of ideas will be considered in the future.

Thomas concluded, “We are off to a decent start to fiscal 2018 with continued positive store traffic and improving e-com trends as we work through and passed our remaining technical issues.”

Nike, Patagonia and Zappos Among Most Ethical Companies